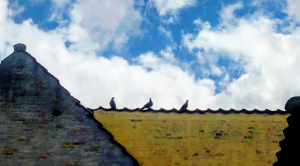 Birds perched on a rooftop in Lyngby, Denmark

The project “Expositions and Exhibitions: Chicago’s Involvement with Early Healthcare Technology for Premature Infants” draws upon the Newberry Library’s collections to better understand Chicago’s relationship with neonatology, infants, and the use of technology as showcased during the Columbian Exposition (1893), the Baby Tent Exhibition (1911), the Century of Progress (1933-34), and other relevant events. As a Newberry Library scholar-in-residence for 2020-2021, this research will contribute to work for a larger book project exploring healthcare technologies in critical care hospital contexts.

Based on “Grotesque Protests in Social Media as Embodied, Political Rhetoric” (Bivens & Cole, 2018), this collaborative book project will examine how social media enables embodied, political protests in the United States and throughout the world. By analyzing political protests that use various body fluids (2012-2021), we argue these embodied, political protests are grotesque and used to recast power relations. In the process, these protestors provide rhetorical counter-strategies to populist discourse, which mirror other historical attempts to do much of the same.

The projects findings are reported in “mHealth Apps and Usability: Using User-Generated Content to to Explore Users’ Experiences with a Civilian First Responder App” (forthcoming). Other notable aspects of the project can be found in “Amplified Precarity in Emergency Response mHealth Apps: Rhetorical Agency in Interface Rhetoric” (forthcoming) and “Pivoting Toward Rhetorical Ethics by Sharing and Using Existing Data to Reduce Data Waste: An Ethical Research Practice for the Rhetoric of Health and Medicine” (forthcoming).

Based in my aural/sonic research in critical care hospital contexts and currently in preliminary discovery and development, the healthcare app will be marketed to hospital administrators and unit educators. Specifically, the healthcare app will be a clearinghouse and storehouse of information for friends and family of patients in intensive care units.